The Peace and Freedom Party urges you to vote as follows on the statewide propositions. Click here for a flyer to print and distribute.

NO on Proposition 1—The Water Bond

Proposition 1 will not give us the water we need. It will put us, our children, and our grandchildren deeper into debt. With interest (tax-free to the wealthy bond investors), the $7.5 billion bond will cost us $360 million each year for 40 years. 36% of the bond money is devoted to the construction of dams and pipelines that will send Sacramento River water to big agricultural companies in the Central Valley. Only 6.9% is earmarked for safe and clean drinking water, some of which will benefit low-income communities. There is no guaranteed funding for much needed projects to replace crumbling infrastructure (like sewer systems) in urban areas. Proposition 1 will not make rain fall from the sky. But it will take our money and use it for the benefit of big agricultural corporations, while building dams will impact the few natural resources we have left.

This is a major revision of a state government “rainy day fund” that voters approved in 2004. Its net effect is to make the state’s budgetary straightjacket even tighter than it already is. A rainy day fund might be useful as a way to soften the periodic blows of the depressions and recessions that are built in to capitalist economies. But only if it is funded from steeply progressive taxes on the rich and their corporations that generate budget surpluses when the economy is growing and government is doing its job. With our current tax structure and meager state budgets, everything that goes into these reserve accounts is being taken away from desperately needed services and infrastructure projects. We urge a No vote on Proposition 2.

Proposition 45 would simply impose the same health insurance rate regulation system that Prop. 103 (1988) imposed on automobile and homeowner’s insurance. The Peace and Freedom Party supports a single payer model as a step toward a National Healthcare System. In the meantime, we must give the Insurance Commissioner the same advance approval authority over health insurance rates that 35 states and the District of Columbia already have. Proposition 45 is a modest step toward reform of a dysfunctional system that, for the present, includes private healthcare insurers.

Proposition 46 increases the cap on medical malpractice awards and imposes mandatory drug testing of doctors. In addition to requiring all doctors to submit to drug testing, it requires all medical personnel to report any doctor they suspect of taking any drug to the authorities. The writers of this initiative included the drug testing provision to get people to vote for it. We think the expansion of the police powers of the state tells us to just say “No.”

Proposition 47 is a step towards making the California criminal justice system less unjust. This proposition would reduce the classification of certain non-serious and nonviolent property and drug crimes from felonies to misdemeanors. It also calls for the consideration of re-sentencing those currently incarcerated for the offenses changed to misdemeanors. However, if the defendant has prior convictions for murder or rape, or is a registered sex offender, that person is not eligible for reduced classification of the new lesser crime. The Peace and Freedom Party is committed to the end of the prison-industrial complex, and civil rights and humane treatment for all human beings. We support Proposition 47 as a step in the right direction, but we are concerned that ruling out individuals with certain prior convictions is fundamentally unjust and unnecessarily draconian.

A coalition of rival gambling interests and people who oppose expanding Native American reservation land are trying to overturn the compact negotiated in good faith by the Wiyot and North Fork Mono. This would be unfair, and a violation of Native American sovereignty. We urge a “yes” vote to uphold the properly-negotiated compact, which is supported by the unions representing casino and construction workers.

Our recommendations on the statewide propositions are available as a flyer for download in Adobe Acrobat format here. This file is intended for printing on 8.5 x 11 (letter) paper. 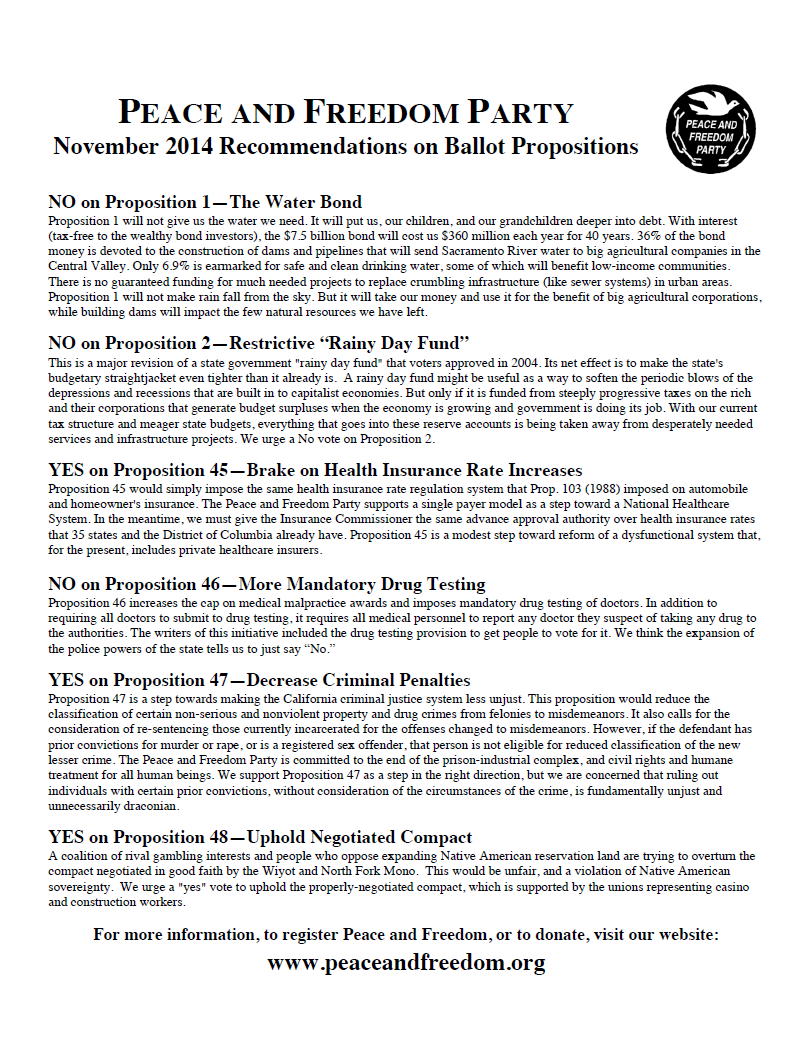