The Peace and Freedom Party supports two write-in candidates in Los Angeles County — Adam Shbeita for Congress in the 44th District and Eric S. Moren for State Board of Equalization in the 3rd District. This article explains how to make sure that your write-in votes for Shbeita and Moren get counted in Los Angeles County. If you live in Ventura County or the small portion of the 3rd District that is in San Bernardino County, see this article instead.

In the blanks underneath the heading “Write-in Ballot” on the long stub portion of the ballot, write both the name of the office and the candidate’s name. Then fold the stub over before returning your ballot to a pollworker. Do not detach the stub.

To vote for a write-in candidate on the audible ballot voting machines provided for voters with disabilities, please ask a pollworker for instructions.

Click on the image below to download the Adobe Acrobat (pdf) document. Print it and take it with you to the polls. 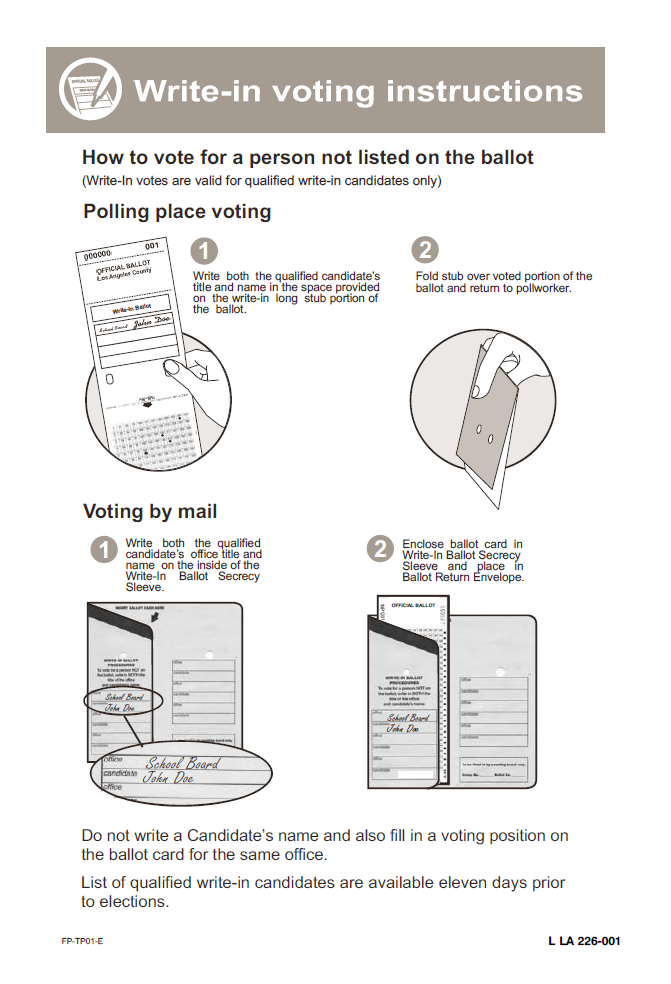 Click here for more information on marking your ballot in Los Angeles County.

The Peace and Freedom Party supports write-in candidate Eric Moren for State Board of Equalization in the 3rd District. This article explains how to make sure that your write-in vote for Moren get counted in Ventura County and the small portion of San Bernardino County that is in the 3rd District. If you live in Los Angeles County, see this article instead.

To vote for a write-in candidate on the touch screen voting machines provided for voters with disabilities, please ask a pollworker for instructions.

Click on the image below to download the Adobe Acrobat (pdf) document. Print it and take it to the polls with you. 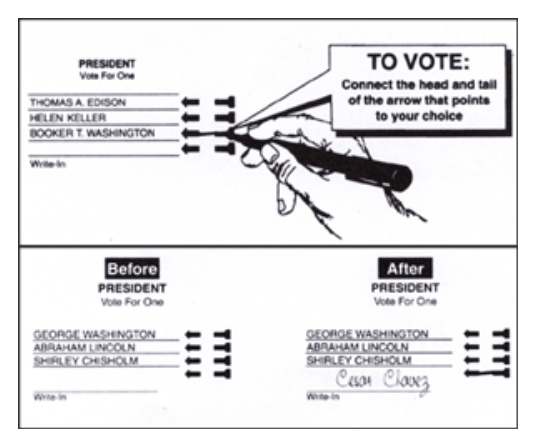 Click here for more information on marking your ballot in San Bernardino and Ventura counties.

Eric Moren, 41, worked his way through the California State University system over a 15-year period, with both student jobs and time off for full-time jobs. Like many working-class Californians born in the 1970s, he has worked a broad variety of jobs, and has a deep personal understanding of the difficulties faced by so many people making their way through an economic system that cares nothing for working people. Before earning his degree in Economics in 2007, he worked in retail stores, as a baker’s assistant, in a stockbroker’s office, as a housing coordinator for the disabled, and in stagecraft, specializing in laser effects. He has been a member of the Retail Clerks (now United Food and Commercial Workers) and of the International Alliance of Theatrical Stage Employees. “I’m proud to be a third-generation union man,” Eric says.

Starting at San Diego State University, then studying at San Francisco State University, Eric completed his Economics degree at California State University Los Angeles. Year after year, higher education in California became less and less affordable, as student fee increases sharply outpaced the rate of inflation. “The promise of a free public education through university level that was adopted by our state in 1960 has been broken, and then broken again,” says Eric. “We need to put California on a quick course back toward free high-quality public education, from preschool through the university. And those most able to pay, the very rich who benefit most from our economic system, must be made to pay for it, as they did in 1960.”

Eric Moren is a candidate for election to the State Board of Equalization (the state tax board) because he thinks working people should be represented on that board. He says “Right now, whether Republicans or Democrats, the Board members really represent the privileged few, not the majority of Californians. When wealthy corporations request tax exemptions and tax breaks, the Board is far too willing to grant them. Every tax cut for the rich increases the burden on those least able to pay, and helps impoverish working people. We need a member of the Board of Equalization who will ask the hard questions, be skeptical of those who want to favor the rich, and make sure that those best able to pay their taxes actually pay them.”

To learn how to cast a write in vote for Eric in Los Angeles County, click here. In Ventura County and the small portion of San Bernardino County in the 3rd District, click here.

The Moren for Board of Equalization campaign would like to hear from you.