This Adam Shbeita for Congress flyer can be downloaded here in Adobe Acrobat format. This file is intended for printing on 8.5 x 11 (letter) paper.

The Clear Choice for Working Families 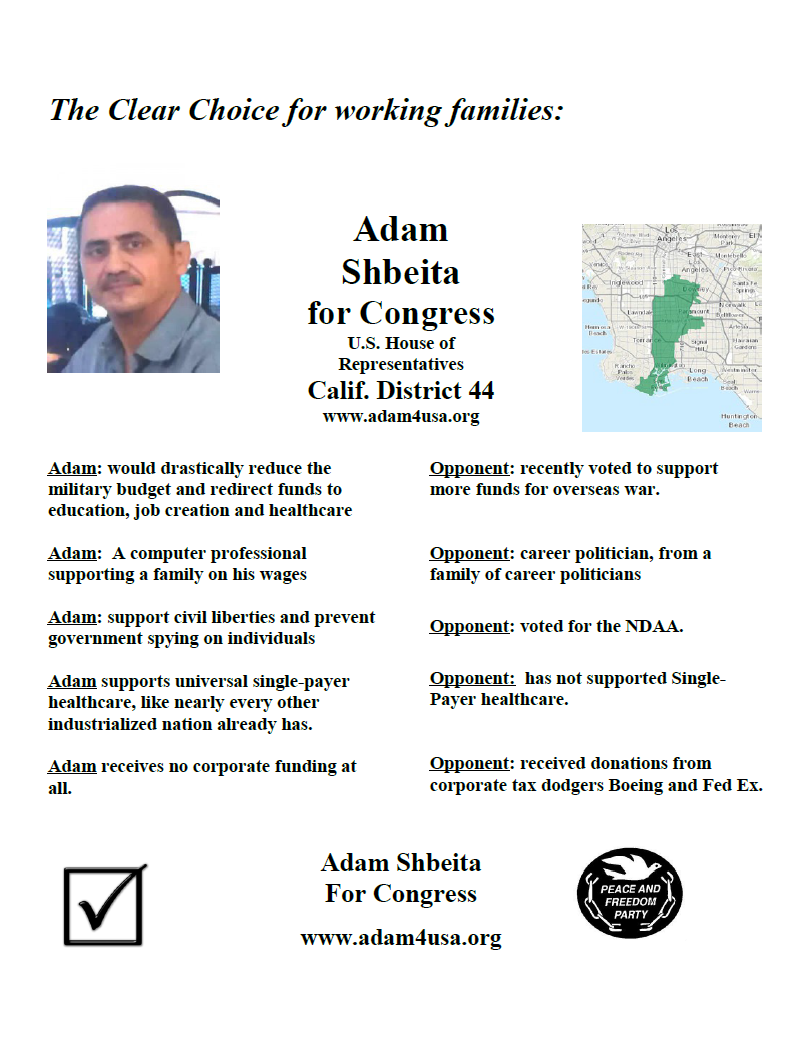 The following statement was provided by the candidate, who is responsible for its content. 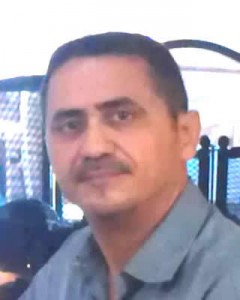 My name is Adam Shbeita. I am one of two candidates for U.S. House of Representatives on the November 4th general election ballot in the 44th District, in southern Los Angeles County. Please let me list some of my positions on the issues, issues that impel me to run for Congress.

Wages for most workers are far too low. If you adjust for inflation, the minimum wage is at about half of the level of 1969. We need to double the federal minimum wage to about $15 an hour to give workers a realistic living wage, allow them to catch up with inflation, and index the minimum wage to the cost of living so that low-wage workers cannot fall behind again. (A portion of the 44th District is within the City of Los Angeles, and I strongly support the effort to put a $15 minimum wage on the ballot in L.A.) Economists who are paid to act as propagandists for corporations will tell you that a minimum wage increase will cost jobs. They know this is not true. In fact, all previous minimum wage increases have increased employment.. While my opponent says she is on the side of workers, she will not endorse a $15 minimum wage.

We need high-quality health care for all. Fair taxation of those best able to pay can supply any deficit in financing. Such a system, much more comprehensive than the Affordable Care Act, would drive down medical costs, particularly by eliminating the private insurance profiteers from their parasitic role in medical care.

Free, high-quality public education for all should be provided from preschool through the university level. California actually had free higher education half a century ago, but tax cuts for the most prosperous and fee increases for students have led to public higher education being too expensive for many working-class students to advance, unless they ruin their lives with huge debts to bankers.

Our tax system needs to be overhauled so that it is more progressive, and so that special influence cannot give big breaks to some of the most prosperous among us. Those who are best able to pay, who benefit the most from our economic system, should pay more than others, and the tax burden needs to be shifted from ordinary workers to the most prosperous Americans. For more than 50 years, taxes on those best able to pay have been reduced over and over again. We need to reverse that process, and meet the needs of our people.

We need to take the big money out of politics. Our representatives should represent the people, not the wealthy corporations that have overwhelming influence in Washington today.

We need to invest in the U.S.A., not in foreign armies and dictators. Instead of putting our high-tech resources into military adventures and wasteful attempts to buy friends with weapons, we need to rebuild our bridges, water lines, railways, highways, and our industries as well as our educational system, healthcare system, mass transit systems, and the rest of the needs of our people.

Above all, we need to save our planet. This will take firm measures to stop polluting and warming our atmosphere. But this can only be done by restraining and limiting corporate power.

Whether you are a member of the Republican Party, the Democratic Party, the Peace and Freedom Party, or the Greens, Libertarians, or American Independents, or of no party at all, please vote for me in November. We are all tired of business as usual. The choice on your ballot is clear: the status quo and disaster, or someone with a point of view that can improve your lives and save our planet. We need all points of view represented in Washington. Don’t the billionaires and their buddies have enough representation there already?

Adam Shbeita, then 18, came to Southern California in 1986 to pursue his education. He earned an Associate of Science degree from Long Beach City College, and a Bachelor of Science degree from California State University Long Beach. He takes pride in having completed his university education while working full-time. “I found that I loved California,” he says, “and so I stayed.” He has lived here his entire adult life.

Adam Shbeita’s deep concern about our children’s future stems from his concern for his own daughter and son, 13 and 11. Adam works as an information technology consultant. In his spare time, he reads extensively, on technology, global affairs, and politics. In sports, Adam favors soccer and basketball.

Immigration reform that enables immigrants to participate fully in American society is a strong concern of Adam’s. Born with Jordanian citizenship, Adam spent his youth in Morocco and Jordan, where his father taught school. Adam is a naturalized citizen of the United States. “I love this place,” he says, “and I want to make it better.”

The Shbeita for Congress campaign would like to hear from you.